Observations of a Newbie

It’s been almost 2 months since we moved, and spring has sprung in Austin. Apparently, those summer temperatures we experienced in early February were not the norm, and we’re back to more normal, albeit Austin, weather. So far, we’ve had the full range, including the most almighty thunderstorms I’ve ever seen (and I grew up near the Alps, which offer some spectacular ones). It’s also extremely windy on a regular basis, which kind of scuppered my plans of planting a micro herb and vegetable garden on the balcony. Add to that the extreme heat and blazing sun when it’s not raining, and any hope of gardening will wither and die. Probably best, considering my total lack of a green thumb (the orchid I so hopefully put in the entry hall has already dropped every single petal).

With spring in the air, the city has turned even more colourful. In addition to the many murals, which adorn so many buildings, bridges and other structures, and render ugly urban concrete into art, everything has turned 50 shades of green, with gorgeous flowers dotting the landscape. The Texas Bluebonnet – certainly the equivalent to the orange California Poppy – grows everywhere and I know I’ll never tire of admiring its lush shade of purplish blue (in fact, bluebonnet blue has just become my new favourite colour). I think I already have around 30 pictures of this beautiful lupine on my phone. 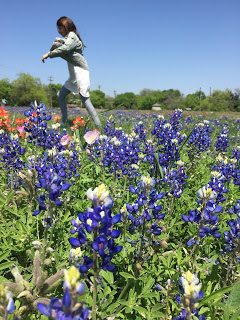 Aside from wind and dramatic drops in temperature from one day to the next, something to get used to – and yes, we’ve been warned – is the humidity. It’s shocking how humid the air becomes when it’s overcast or raining. The air con is running constantly just to keep the house dry, and thank goodness the previous owner of the house left a dehumidifier behind. If I had any plants to water, I would never need to use the tap.
Exercising in this weather is also interesting, as it feels like rainforest the minute you step outside, and it’s hard to tell whether you are sweating from exertion or simply from being outside. But I guess we’ll get used to it. For now, we’re quite enjoying the crazy weather – it makes a change from all those years of predictable California sunshine! (not that predictable sunshine is a bad thing)

All in all, we seem to have settled in pretty ok. Austinites are a friendly bunch, and the whole place has a very earthy, mellow feel. We loved the relaxed atmosphere of SXSW, the South by Southwest film and music festival, or “South By”, as the locals call it, and managed to see a few bands with our girls. Food culture is huge here too, but less in a poncy, fine dining sort of way, rather a more relaxed and down-to-earth style. Austin-style. It suits us very much.

Another thing I’ve noticed is that people do like their manners here, and take great pride in being courteous. I’ve had 13-year-olds introduce themselves (no parental prompting) by handshake, while looking me in the eye, which led me to stare back at them open-mouthed, gobsmacked, completely forgetting my manners. Good manners are a big part of the school agenda too, and I get a fair amount of “Yes, Ma’am” each day, which still thrills me.

Friendly as they are, Austinites don’t seem to like Californians. We learned pretty quickly that the right answer to the question “Where’re y’all from?” is not “San Francisco”. At the beginning I would say, “I’m German, but moved here from California”, but now I skip the last bit, and people are much happier. Texas has a huge German community, so we’re good (I will need to research all that heritage one day). It seems that Silicon Valley has got Austin in its clutches, with lots of companies moving here, and Austinites are lamenting the decline of their city’s culture because of the influx of rich Californians, who are pushing house prices up (and clog the roads). Hm, I might have to quietly make our In’n’Out beach towel disappear and purchase a “Don’t mess with Texas” one, just to keep the peace. S recently saw someone wearing this T-shirt:

Texans are proud, and even though Austin isn’t like the rest of the State (I’ve seen more Bernie and Hilary support signs here than anywhere else!), there is some fierce patriotism going on. This reminds me of Bavarians (and other Germans), or Scots (and Englishmen).
As a Bavarian girl, I totally get this. And I also, unexpectedly, quite like the Texas drawl! Unlike the California drawl, which is just, well, drawly, people here speak with a softer, slightly slower, melodious accent. Think Matthew McConaughey, not Ted Cruz.

Unfortunately, Ted Cruz reminds me again that we are indeed in Texas, and however different Austin may be, it’s still Texas. The fact that guns will be allowed on the University of Texas’ campus from next autumn really upsets me. It’s utter lunacy, and the fact that the people of Austin, the professors, Dean and students haven’t been able to prevent the law from passing is deeply unsettling. I wonder what this city will be like in 5 or 10 years’ time.

(We miss California. A lot.)